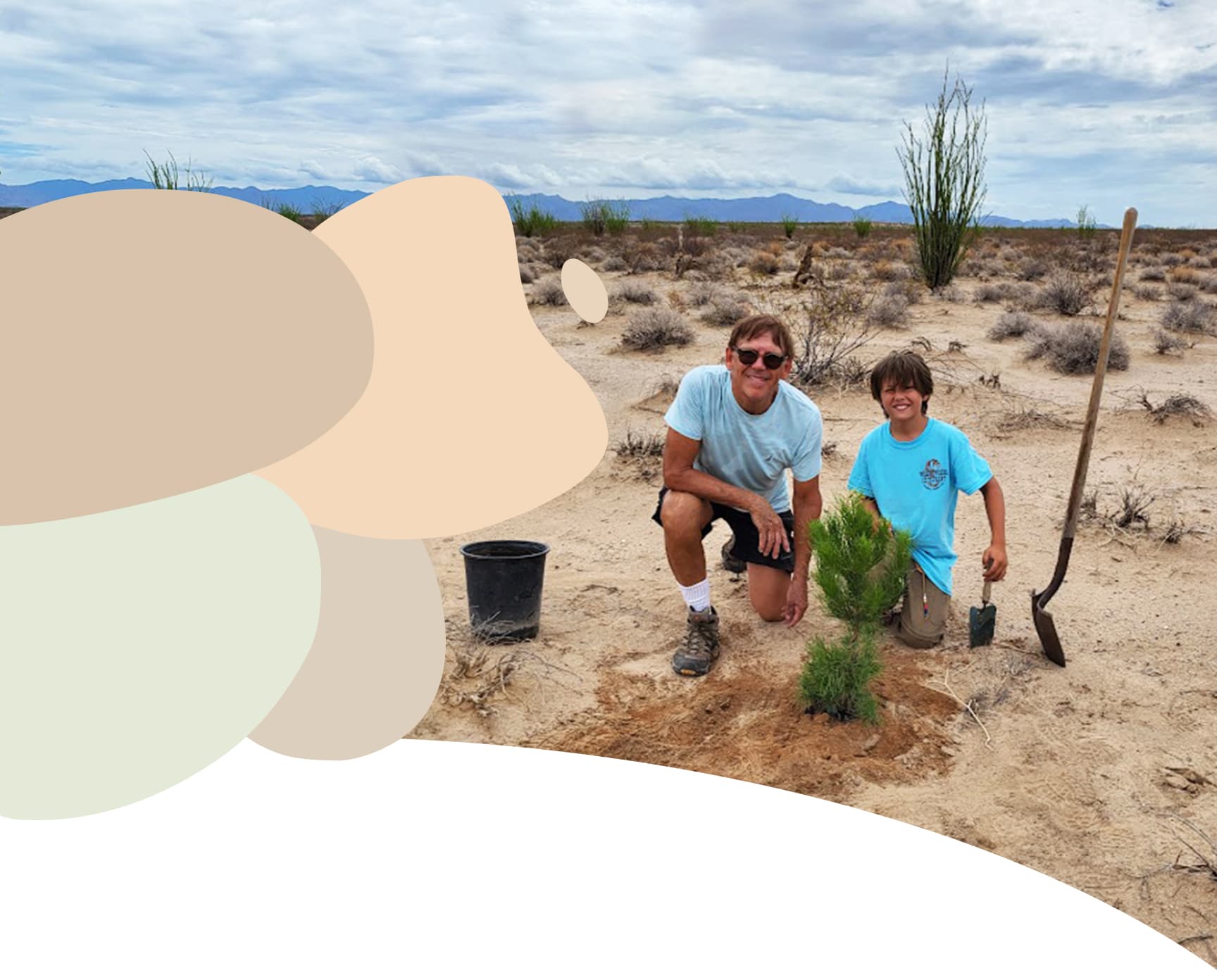 We plant trees where they don’t grow on their own

Turn millions of acres of deserts into forests while seriously expanding carbon sequestration where there is almost none. Replace our planet’s destroyed equatorial rain forests with forests on protected deserts lands.

Demonstrate to everyone what can be done with their deserts by tapping into Primary Water.

Primary Water: Earth-generated water that is formed below the Earth’s crust, in the mantel, and comes up, often as steam, through cracks, faults and fissures, frequently collecting in underground aquifers

Almost all climate and environmental scientists are amplifying their dire warnings of how we are damaging the our planet. It’s quite common to frequently hear this on the news.

“Pinning down exact numbers is nearly impossible, but most experts agree that we are losing upwards of 80,000 acres of tropical rainforest daily, and significantly degrading another 80,000 acres every day on top of that.”

Together we can solve this

1 minute video of how we turn deserts into forests ↴

Something can be done, but we are running out of time so we must act fast.

We started a project of turning deserts into forests to offset the destruction of our equatorial rain forests, seriously increase carbon sequestration naturally and have a working model to show what can be done with deserts and arid lands by turning them into a large enough forest that will significantly increase the local and/or regional rainfall.

How do trees cool Earth and
increase rainfall?

Usually the cooling effect of evaporation is limited to the surface from which water evaporates. For example, our body also cools using the same mechanism. Our sweat evaporates by drawing heat from the skin, making us feel cooler.

But with trees, the cooling effects is felt below and around the canopy for three reasons. First, all the leaves are transpiring together as one unit: the canopy. An immense amount of water is evaporating from the canopy – as much as 20 – 30 gallons a day per tree – drawing in heat energy from all around the canopy. This transpiration and evaporation water vapor goes up into the atmosphere, forms clouds and comes back down as rain, which also cools the entire area.

Second, more stomata are present in the lower surface of a leaf. This makes cooling effect under the canopy more pronounced.

Many of these pollutants are toxic to humans, yet they are beneficial to plants as nutrition such as nitrogen and sulfur, essential elements in fertilizers. The leaves of trees have pockets, known as Stomata, which filter in these pollutants and expel oxygen.

Trees draw up water from their roots and transport it to the leaves, where photosynthesis takes place. Up to 99% of the water that reaches the leaves is lost as water vapor when the stomata (openings on the leaf surface) open and close to exchange carbon dioxide and oxygen. This process is called transpiration, and the resultant cooling effect is called transpiration cooling

The solution to this barrier is Primary Water, earth-generate water formed below the Earth’s crust, in the mantel.

What is Primary Water?

Primary water is not a new concept; science has long considered and investigated earth-generated water.  Just think of the steam produced by a volcano and associated thermals and hot springs as well as mountain springs and streams-there is certainly water emerging from within our planet.

The reason you  have not heard about primary water is due to popular scientific theories about the origin of water on earth-such as comets and asteroids-and with the focus on the water system we see and are the most familiar with: the hydrological  cycle of water that includes runoff, evaporation  and precipitation.

Much less attention has been paid to the water that comes from beneath our feet-ready to be accessed and used by people, animals, farms and industry.

Primary water refers to earth-generated water (H2O, in all its phases) produced from primary rocks which are also the source of our primary minerals. The emerging multi-disciplinary science of Geo-Hydrology (as opposed to Hydro-Geologyand traditional Hydrology) focuses specifically on investigating and locating primary water and is related to Geo-Chemistry, Geo- Physics, Mineralogy, Geology, Geomorphology, Seismology, Crystallography and Volcanology, as well as Astro-Biology which studies the creation of planetary water and thus life throughout our Solar System and the Universe.

Primary water is created by the electromechanical forces of our planet, subjected to tremendous pressures and temperatures, both near surface and deep in the hydrous mantle transition zone, at a depth of 410-660 kilometers (250–400 miles), that has been identified by deep-earth seismologists, mineralogists and astro-biologists. The term primary water dates to a scientific paper in the Geological Society of Stockholm Proceedings of 1896 by renowned Finnish-Swedish geologist, mineralogist and explorer Adolf Erik Nordenskiöld titled, “About Drilling for Water in Primary Rock” for which he was nominated for the first Nobel Prize in Physics. Nordenskiöld died in 1901 before the first prizes were awarded.

This paper was translated into English and included in what is considered to be the primary water textbook, “New Water for a Thirsty World” by University of Southern California professor Dr. Michael Salzman published in 1960, with a forward by Aldous Huxley, and which largely traces the career of the German-educated mining engineer and pioneer primary water geo-hydrologist Stephen Riess. Such leading scientists as Nobel Prize winners Linus Pauling and Willard Libby as well as the eminent geologist Ralph Arnold collaborated with Salzman during the four years he spent researching the subject as a result of numerous news articles chronicling Riess’s exploits during the 1950s.

It was Riess who introduced the term primary water into English and the scientific lexicon by calling “the new water he finds ‘primary’ water because of its close association with primary minerals.” In 1957, Encyclopedia Britannica’s Book of the Year wrote the following on The “New Water” Theory of Stephan Riess: ―Stephan Riess of California formulated a theory that “new water” which never existed before, is constantly being formed within the earth by the combination of elemental hydrogen and oxygen and that this water finds its way to the surface, and can be located and tapped, to constitute a steady and unfailing new supply.  — 1957 Britannica Book of the Year

Why this has not been done before is only because of a lack of one vital ingredient, water, in a viable and consistently abundant supply, which is not depleting other known water sources. This has always been the insurmountable barrier in arid and desert lands.

We have already completed the first steps of locating Primary Water in a number of Arizona desert areas.

Our success rate for drilling wells that produce an abundant supply of Primary Water ranges between 95% to 98%.

Your donations will be used in purchasing private desert land or acquiring leases from the US Department of Interior, Bureau of Land Management (BLM) to be used exclusively for growing forests and natural carbon sequestration.

Your 100% tax deductible donation will go directly towards:

What we have already done.

We have located Primary Water on 310 acres of private land that is surrounded by Federal Land. We planted a few indigenous tress to find out which ones will do the best at this location. We will only use this land to grow a model forest. An Arizona District office of the U.S. Department of Interior, Bureau of Land Management, has already green lighted our project on Federal Land. One of the requirements is following NEPA (National Environmental Protection Act). This model forest will fast track that entire process and the probable expansion of this forest onto thousands of acres of Federal Land.

How your donations will be used.

Your 100% tax deductible donation will go directly towards:

Secure desert and arid lands where Primary Water can be accessed to grow trees and other vegetation to offset the destruction of forests, vastly increase carbon sequestration naturally and increase local precipitation through the resulting transpiration as a model to show the rest of the world what could be done with their deserts.

A Small Sampling of Recent Media That Supports Our Project

How We Are Not Like Any Other Tree Planting Organizations

We plant and grow trees where there are not any – in treeless, barren deserts that are unutilized or underutilized and can be dedicated specifically to forestation. With so many of our forests having been destroyed and repurposed, there is a huge difference between increasing the amount of land that can be forested (literally turning deserts into forests) and simply planting trees.

We own or will be leasing Federal lands (40 year leases that are renewable for 2 additional terms), which we have already planted trees on. This allows us to manage our trees not only to maturity but into actual forests, which will also greatly enhance wildlife habitat.

We plant trees. We do not plant seeds and call them trees. We manage the trees we plant to ensure the overwhelming majority do not die and make it to maturity to collectively become forests.

We use cookies on our website to give you the most relevant experience by remembering your preferences and repeat visits. By clicking “Accept All”, you consent to the use of ALL the cookies. However, you may visit "Cookie Settings" to provide a controlled consent.
Cookie SettingsAccept All
Manage consent

This website uses cookies to improve your experience while you navigate through the website. Out of these, the cookies that are categorized as necessary are stored on your browser as they are essential for the working of basic functionalities of the website. We also use third-party cookies that help us analyze and understand how you use this website. These cookies will be stored in your browser only with your consent. You also have the option to opt-out of these cookies. But opting out of some of these cookies may affect your browsing experience.
Necessary Always Enabled
Necessary cookies are absolutely essential for the website to function properly. These cookies ensure basic functionalities and security features of the website, anonymously.
Functional
Functional cookies help to perform certain functionalities like sharing the content of the website on social media platforms, collect feedbacks, and other third-party features.
Performance
Performance cookies are used to understand and analyze the key performance indexes of the website which helps in delivering a better user experience for the visitors.
Analytics
Analytical cookies are used to understand how visitors interact with the website. These cookies help provide information on metrics the number of visitors, bounce rate, traffic source, etc.
Advertisement
Advertisement cookies are used to provide visitors with relevant ads and marketing campaigns. These cookies track visitors across websites and collect information to provide customized ads.
Others
Other uncategorized cookies are those that are being analyzed and have not been classified into a category as yet.
SAVE & ACCEPT